Mobility, Stability and Flexibility: Clarifying Our Concepts in Yoga 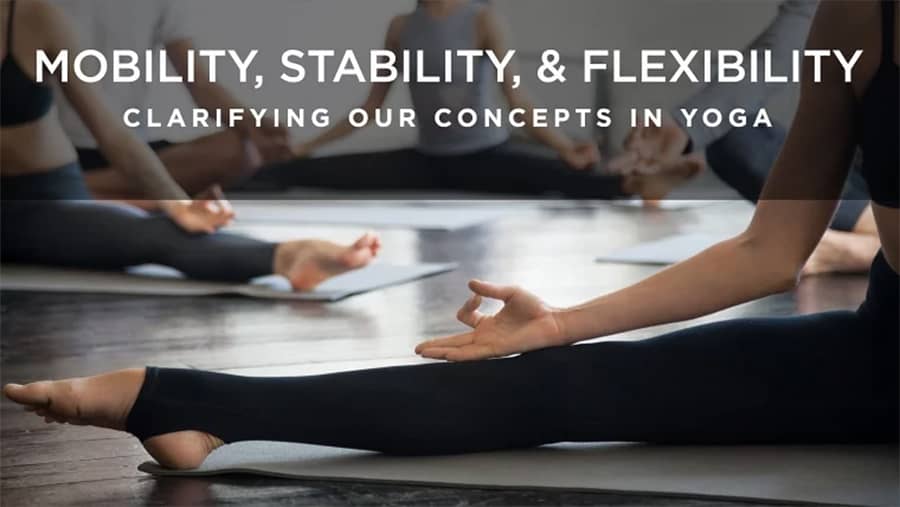 By Jenni Rawlings, on Yoga International

Mobility, stability, and flexibility are qualities we’re often taught that we are working to improve through our yoga practice. These terms are somewhat ambiguous, however, and it’s common for each of them to be interpreted differently by different sources. As a result, not all yoga teachers approach these concepts the same way. In this article, I will clarify the concepts of mobility, stability, and flexibility and present what I consider to be the most helpful definitions for each as applied to the practice of yoga.

Let’s start by examining the concept of stability. The phrases “core stability,” “shoulder stability,” and “hip stability” are all common uses of this term in the yoga world. But what exactly does stability mean?

Perhaps the most common understanding of stability is “not moving” or “stillness.” In yoga, the idea is often that in order to be stable a body part should be prevented from moving. When we apply this notion of stability to our yoga practice, we are inclined to hold parts of our body rigid. Some examples of this “stability as rigidity” strategy are the common practice of drawing the lower abdominals in throughout a yoga practice, the emphasis on non-moving, protracted shoulder blades during the movement into chaturanga dandasana, and the belief in the importance of a “neutral spine” that neither flexes nor extends in the majority of our yoga poses.

But despite the widespread understanding of “stability” as meaning “unmoving,” this is not actually the true textbook definition of the word. In kinesiology (the study of how the body moves), stability is technically defined as how well a system can return to an orientation after a perturbation. For example, picture a yoga student in side plank (vasisthasana) who is strong and actively engaging through her bottom arm. If someone were to come up and bump this student (i.e., initiate a “perturbation”), her body would move somewhat in response to the bump, but then it would most likely quickly return to its original side plank position with little disturbance. This is an example of a stable side plank. “Stability” in this sense doesn’t mean that no movement happened—it means that when an unexpected bump happened, the student had control over her position and could return to her side plank shape efficiently …